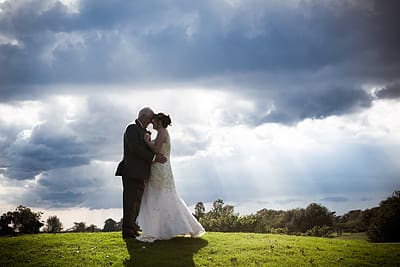 Who said lightning doesn’t strike twice? Lightning is how we would describe the love that is shared between Debbie and Jay. After our initial phone call with Debbie, we learned that amidst both of their busy lives with work and blending their two families together, at the end of the day, they just wanted to be husband and wife. Their Long Island wedding took place at the lovely West Sayville Golf Club on the island’s south shore. Their “no fuss”, laid back mentality in the planning of their day worked to their advantage, because despite a quick sun shower, and threatening thunderous clouds, every part of their day went off without a hitch – and they couldn’t have been happier about it. Below are some of our favorites from their special day. Congratulations Debbie and Jay!!!

I think the image above deserves a special caption of its own. Only a couple weeks before Debbie and Jay’s wedding, Jay’s beloved brother passed away. When the clouds started to break a little we couldn’t help but think “Heaven” was shining through and thinking it was Jay’s brother’s way of saying “hi” and congratulations to his brother and new wife.