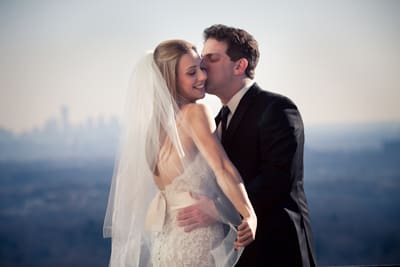 Let’s just start by saying that this wedding between Jennifer and Josh was originally scheduled for October 30th. If that date rings a bell in your mind, it is probably because it was the craziest weekend in Halloween history with a full blown snow storm in the middle of fall! Unfortunately, due to the amount of snow and circumstances surrounding the venue’s loss of power the night before, the wedding had to be rescheduled. Even more interesting is the fact that the mothers of the bride and groom had originally planned the entire event in the span of just a few months (and Jennifer made it clear to everyone – No, she’s not pregnant. They were just really excited about getting married!). So we can only imagine how much more work these moms had to do in order to pull it all off once again!

Nevertheless, everything turned out perfectly and without so much as a glitch! Even the unpredictable December weather cooperated and it turned out to be a mildly cool day with beautiful blue skies and a clear view of Manhattan over the river. Oh! Let’s not forget the awesome location of the venue, Highlawn Pavillion, set atop one of the highest points on the Eagle Rock Reservation. Breathtaking! We were absolutely thrilled to work with such a laid back couple and their wonderful families. A special thanks to MOB Jane, who worked with us every step of the way from the scheduling, rescheduling, planning and day of logistics. We couldn’t have planned it any better ourselves!