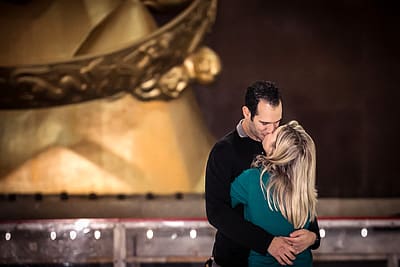 We’ve said before that our work as wedding photographers often involves stealthy cat-like moves with ninja-like presence and precision. Well, when Dave contacted us to share his plans to propose to his girlfriend Kristen at NYC’s famous Rockefeller Center Ice Skating Rink underneath the romantic lights of the Christmas Tree (otherwise affectionately referred to as “The Tree” by most New Yorkers/New Jersey-ians) we knew these skills would definitely come in handy. After much planning with Dave and his future mother-in-law Petra, the plan was officially in motion and we were PUMPED to capture such a special moment between the future Mr. & Mrs.

Their proposal took place on a Saturday night at 8:00 – only a few days after the celebrated lighting of The Tree – and as you can imagine, Rockefeller Center was packed with people coming to see The Tree and watch the skaters below. So when the clock struck 8:00 and the “ice guards” cleared the ice for Dave to make his big move, the City was roaring with applause and cheers as he got down on one knee – and Kristen was beyond shocked. After she said “YES!”, the two skated around the rink to their song and Dave surprised Kristen one last time pointing to their cheering family up in the crowds. It was a very special night for everyone involved, and we’re thrilled to be able to share some of our favorites from their proposal! Big congratulations to Dave + Kristen!